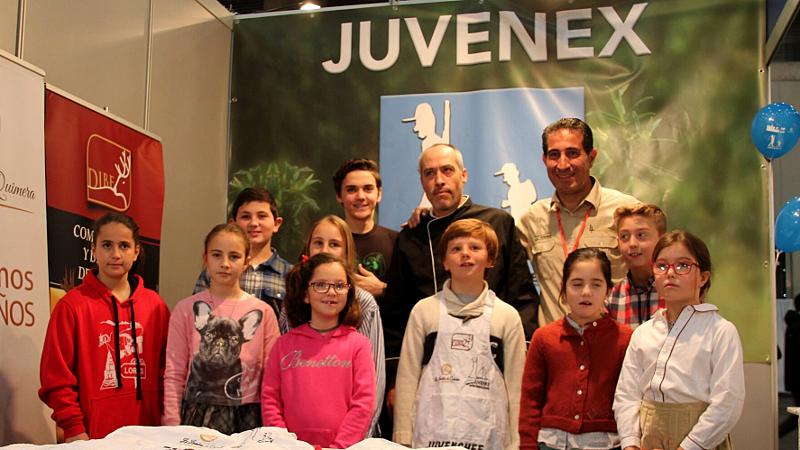 The experience of Juvenex in Madrid this year has been very positive for the participation of children and young people in their booth. The presence of this association on the trade fair focused on two main objectives: to promote the crafts parallel to the hunting industry within the rural development, as are the taxidermy or the art of carving the horn, and encourage the consumption of game meat.

The horn carving workshop for young people called the maximum attention of the public, watching live carving to the smaller of the hands of the craftsman Valentin Caballero.

But Juvenex activity at the fair, which became one of the most public brought together, was a Master Class of kitchen with game meat for children that has been organising this association from three years ago and that is known with the name de JUVENCHEF JUNIOR.

In this presentation in Madrid was once more with the collaboration of the companies of Cárnicas Dibe and La Lumbre de Quimera Catering.

The meeting was attended by the chef of exception, Javier Zamorano, and as assistant stars the small Fernando Gil, contestant on the Program of Spanish Television Master Chef Junior, who gave a first cooking lessons to all the children who participated in this activity so striking and novel.

Wafers of bread with wild boar meat and egg of cordoniz, lollipops of venison with melted cheese were some of the dishes prepared these small great chef.

During the fair were also able to enjoy the smaller games as, Tiro al patoque that collapse at certain times all around the stand.

A balance outstanding of Juvenex in hunting that also became a meeting point to greet friends and collaborators.

"From Juvenex we want to give thanks to the organization of the fair for having made it possible for our presence in the already has established itself as the most important fair of Spain, Cinegética," they concluded.